Rally for Kids With Cancer: Need I Say More?

On November 20th and 21st Cecilia Perez participated for the first time as a proud sponsor of Rally for Kids with Cancer, a majestic charity pushed forward by an actress that is not only beautiful on the outside but more so in the inside, Eva Longoria. This charity helps kids with no funds to continue on with their cancer treatments. The courageous strengths of these souls are an inspiration to anybody in the world. Their smiles yet their health so devastated by a mortal sickness is a boost for the spirit of any human being.

Cecilia Perez got the opportunity to share again a moment with Eva Longoria but this time it was the most wonderful of all giving the opportunity for fashion to hold the hands of many children that need some TLC to continue on with a battle that can be disheartening. Still, their faith and hopeful eyes are the best gift one can receive.

We want to thank Eva Longoria for inviting us to participate in this beautiful cause and want to make this invitation extensive to all of those that can help, anything counts and can save a child's life.
Posted by Cecilia Perez Haute Couture at 9:42 AM No comments:

2009 Year in Review: From the Desk of Cecilia Perez

Several events have been the highlights of the year.

Cecilia Perez wants to communicate with her clients, staff members and sponsors to detail the aftermath of the present year.

In anticipation to Thanksgiving and with the intention of thanking all people who have made this year a success, Cecilia Perez wants to make sure there is clarity and knowledge as to the happenings within the current year.

Many people have had a collaborative spirit and ample participation in Cecilia Perez Haute Couture 2009 various runways, festivals and directives.

During the month of April, Black Tie Magazine celebrated the Anniversary of Diana, Princess of Wales, with the presentation of a runway which Cecilia Perez took an Haute Couture preview. Several weeks later, also during the month of April, a private runway took place organized by Mr. Emanuele Viscuso as part of the Sicilian Film Festival in Coral Gables, Florida.

This year was particularly significant for the Haute Couture Designer because she was able to be active in her native country, Colombia showing her collection.

A cocktail party in the Dann Carlton Hotel in Bogota, Colombia was offered by Cecilia Perez where a wedding dress exhibition full of flair and taste was flaunted. Alex Flaque, President of Gaudi House was gladly impressed by what he saw and expressed through diverse media that he hadn't seen such an exciting design in twenty years.

On September, the runway named ALO Bit Woman unfolded in front of the Colombian public. The funds collected through this runway have the objective of achieving a dream for a child with cancer. Cecilia Perez is proud to have been there and hope the dream of many children are accomplished.

October was a stimulating month with contrasting and satisfying events. On the 14th, she was selected to introduce some of her pieces in the Vanidades Runway. Even though, she couldn't personally attend, the haute couture pieces were shown and very well received. That same week, Cali Exposhow took place. This was truthfully the first time Cecilia Perez has a complete runway with her collection in Colombia. The show titled Cara Sposa had excellent national and international press comments and attendance.

Lastly, Cecilia Perez wants to close the year not only thanking but inviting time and time again all clients, sponsors, presenters, staff and press to continue looking forward to years to come with a spirit of love and happiness.
Posted by Cecilia Perez Haute Couture at 9:21 PM 2 comments:

The colors that are primarily used throughout the collection are bronze, ocre, black, beige and gold. Laces continue to awe the public! Wear your fall colors in a Spring night and open mouths as you make an entrance.

Miami Living Magazine is a magazine that is distributed throughout diverse retail stores, hotels and entertainment locations. This Magazine exhibits new and upcoming trends in Miami's lifestyle.

Go ahead and browse the issue, the title of the article is "Jewel in the Rough".
Posted by Cecilia Perez Haute Couture at 9:19 PM No comments:

Cecilia Perez Arrives to "The Knot"

Now, the exclusive wedding dresses designed by Cecilia Perez arrive to "The Knot". The dresses offered through the huge # 1 wedding gown site are all custom made. Yesterday, the newsletter published by "The Knot" launched Cecilia Perez as one of their featured designers.

Expectations are high and quality immaculate for five pieces that can be admired and bought through "The Knot". Any potential buyer will have the opportunity to talk to the Designer if need be. She is very involved in the process, especially in regards to Brides since understands this is their day to shine. 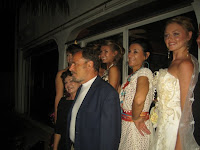 The winners of the fourth Miami's 2009 Sicilian Film Festival have been declared
The fourth annual Sicilian Film Festival, which has become America's window
to Sicilian cinematography and culture, came to a close on April 19th in Miami Beach. The Festival's goal is to promote Sicilians abroad and to furthermore remind the general public that a substantial part of the most notable Hollywood celebrities have Sicilian origins.
This year, the Festival's activities were held at the Miami Beach Cinematheque; its pre-opening party was held at the elegant house of Hon Marco Rocca, Consul General of Italy in Miami and its final traditional festivity was held at the
Villa Viscuso with a party in honor of Franco Nero, after the screening of his movie The Breath Of Life that Franco Nero shot in Palermo together wit his wife Vanessa Redgrave. Among the many celebrities attending the party, the Italian
designer Renato Balestra, the Italian Oscar Award Francesca Lo Schiavo, HRH Princess Thi-Nga of Vietnam and many more. The closing event had the special touch of a song show by Kelly Roberts and a fashion show by Cecilia Perez, whose inspiration for this show was Sicily. During the closing event, the jury, made up of Claudio Angelini,Ed Cristin, Dana Keith, Camillo Ricordi, Marco Rocca and Jannette Stark awarded the movies af follows:
Best Film:Cover Boy by Carmine Amoroso, produced by the Sicilian producer Augusto Allegra with Finland Srl,
Best Direction: The Sicilian Girl by Marco Amenta, Produced by Euro Film, Rai Cinema, R&C productions, Roissy film
Best Actor: Luca Lionello in Cover Boy, Produced by Finland srl
Best Actress: Veronica D'Agostino in The Sicilian Girl by Marco Amenta Produced by Euro Film, Rai Cinema, R&C productions, Roissy film
Best TV Movie The Viceroys by Roberto Faenza, Produced by Rai Fiction and Elda Ferri
Best Short Film :The Heart Inside the Sea by Claudia La Bianca
Special Mention to the Short Film Being Handy by Vincenzo Cosentino
Special Mention to the Short Film Faida 2 The Revenge by Giorgio Galieti
Best Artistic Contribution to Asuka Barden for the music of The Heart Inside the Sea by Claudia La Bianca
Best Documentary: The island Inside: A Journey Through Vincenzo Consolo's Sicily by Ludovica Tortora De Falco, Produced by Arapan Cinema Documentario
Special Mention to the documentaryVara by Joseph Gardella
Special Mention to the documentary Easter in Sicily by Sigal Bujman.
The founder and president of the Sicilian Film Festival, the Italian sculptor Emanuele Viscuso, and its artistic director Salvo Bitonti are already at work for the next annual event to be held in 2010.
Posted by Cecilia Perez Haute Couture at 7:18 AM 1 comment:

Cecilia Perez has been having an eventful year to say the least.

In 2008, Couture Fashion Week was a huge success. The show took off in New York and the "finale" of her haute couture design runway ended with a gorgeous 3 piece bride gown that offers the bride the opportunity to carry an alternative and elegant reception party dress as an option.

Any follower of Cecilia Perez artistic designs can go to this link and see the Couture Fashion Week Show for themselves: http://www.keftv.com/movies/fashion/CeciliaPerez.html

Now, the Cecilia Perez brand is launching into a new arena by joining other designers and featuring her pieces in "theknot.com". Her exclusive designs will be available through the well known website and magazine.
Posted by Cecilia Perez Haute Couture at 10:48 PM No comments: